Across the Dōjima River from Kitashinchi — where Zentis Osaka is located — lies Nakanoshima, a district with a flourishing concentration of administrative, financial and cultural institutions dating to the Meiji and Taishō eras (between the late 1860s and mid 1920s). Accordingly, eminent works of architecture representative of Japan’s early-modern period can still be found here today, including the old building for the Bank of Japan Osaka Branch, completed in 1903, and the Osaka City Central Public Hall, completed in 1918. Particularly prominent among them is the Nakanoshima Library with its stately air, featuring round columns and a large triangular gable reminiscent of a Greek temple.

Above the entrance, the original name at the time of opening is still displayed: Osaka Library. The library was built by the Sumitomo family, who amassed their fortune in Osaka’s early-modern period and went on to form one of Japan’s most prominent zaibatsu business conglomerates. With the family’s donation of the building to Osaka Prefecture, the library opened in 1904. In addition to its collections that include documents and manuscripts from long in the past and regionally-relevant materials, the library has come to offer a range of services to the public in recent years, such as the provision of business-oriented information. 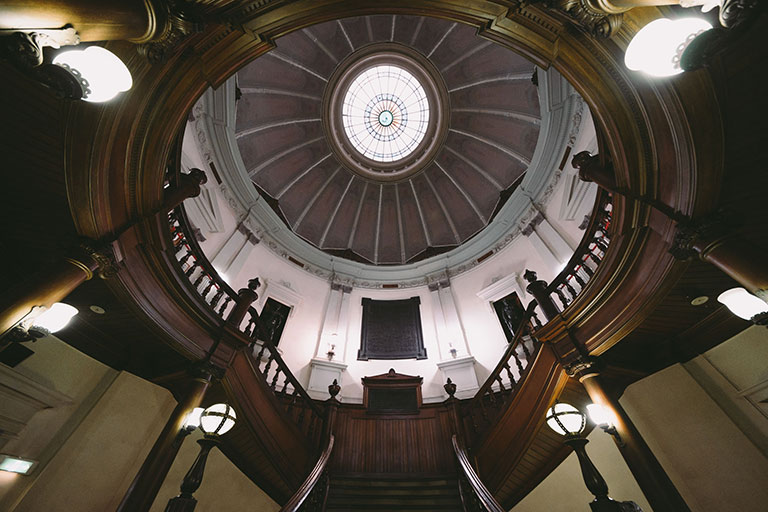 Inside the doors, a vaulted hall stretches out beneath the structure’s distinctive dome. Presenting an impressive contrast to the stately look of the stone-built exterior, the library’s wooden stairway traces gracefully curving lines.

With wings to the left and right housing a reading room, café and more, the library still enjoys broad usage as a cultural institution for the public even now over a century since it first opened its doors. 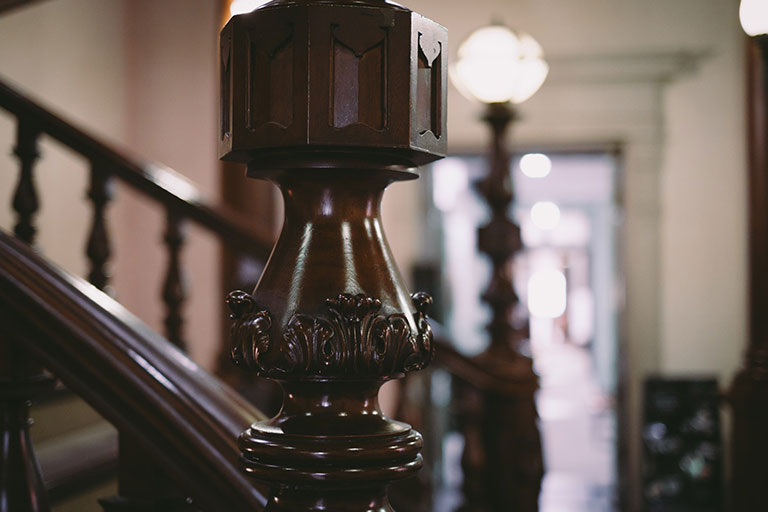 Now, as of July 2020, Nakanoshima has welcomed one more notable architectural structure designed to house collections of books with the Nakanoshima Children’s Book Forest. As the name suggests, this one is a cultural institution devoted to putting children in contact with books and stoking their interest in the pleasures of reading. With its open, vaulted three-story construction, the library houses a collection of 18,000 books organized into a dozen uniquely conceived themes. 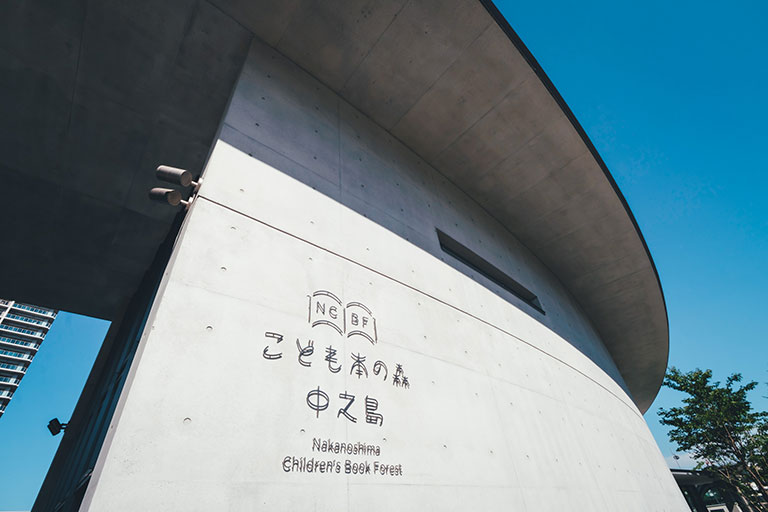 One of the building’s distinguishing features is its plentiful usage of gentle curves, in the form of the concrete-built structure as well as in the bookcases installed inside, evoking the course of the river that flows by outside. With design features including slender spaces in the gaps between bookshelves — offering views outside — and picture book corners set up beneath stairways — where adults might have to be careful not to bump their heads — a spirit of imaginative playfulness abounds in the space. 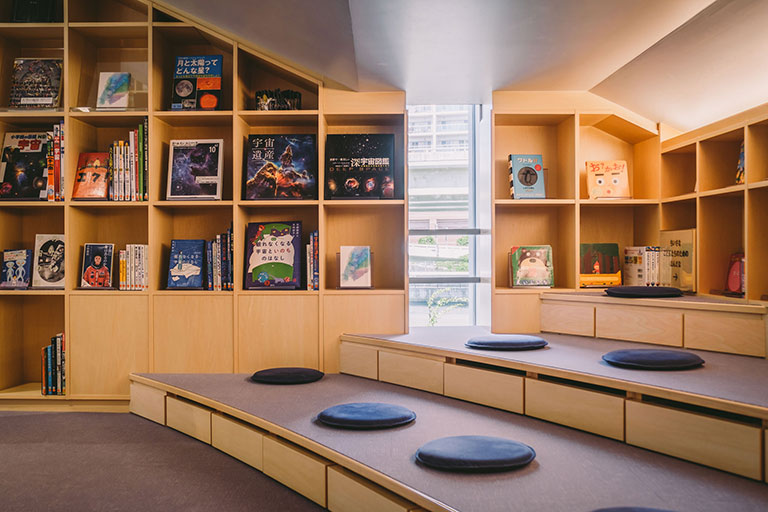 Osaka-born architect Tadao Ando was the designer of this library. Pursuing a design meant to provide “a place to foster sensitivity and imagination in children,” Ando donated his work designing the structure to the City of Osaka. 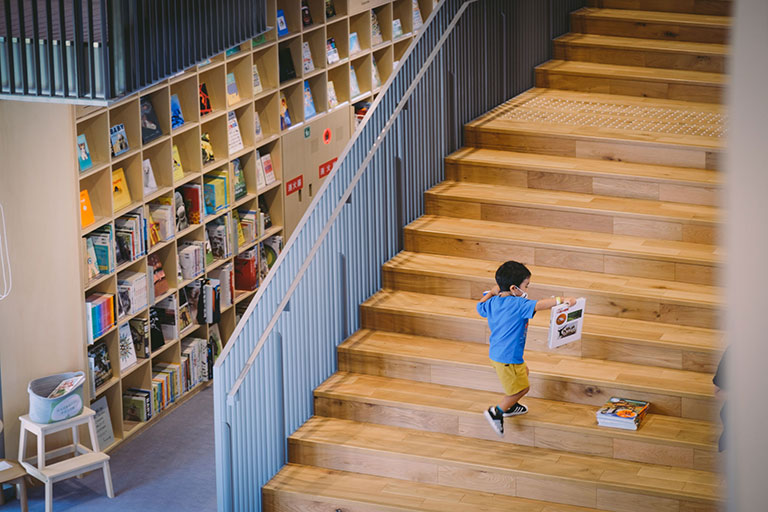 One of Ando’s own favorite spaces in the building is said to be a small, cylindrical room walled in concrete. Designed to let light stream in through a round hole in its tall ceiling, the space imparts to visitors a feeling as if they have stepped into a high tower. While the space is empty, without even a book inside, it offers a curiously calming sensation. At certain times, it also features beautiful projection-mapping displays, with scenes from classics such as The Little Prince by Antoine de Saint-Exupéry and Kiki’s Delivery Service by Eiko Kadono, where visitors can savor a taste of the spirit of enjoyment that goes into coming up with the imaginary worlds the stories depict. 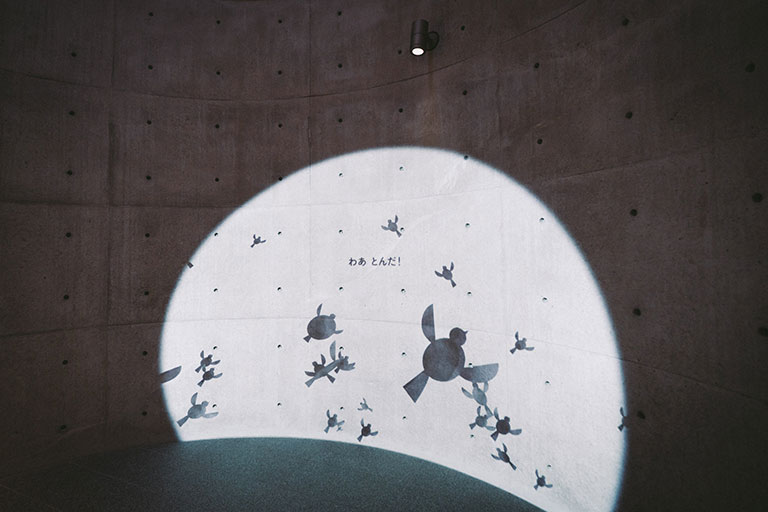 While these two architectural structures — the Nakanoshima Library and Nakanoshima Children’s Book Forest — may differ completely in their objectives and histories, one point they share in common is their status as architectural works intended for public use, with stories, intellectual knowledge and the like housed within their walls. Be sure to stop by both to experience a taste of their respective charms for yourself.