Enjoy a Drink in Kitashinchi Fashion

“Pretense is not something Osakans are into. They prefer things to be simple and to taste great. Are you familiar with the ‘half rock’ style? It’s been a staple around here for many years, and basically it means serving a drink on the rocks with the addition of a little water. A drink served on the rocks gradually takes on a nice quality of flavor as you slowly sip it. ‘But I want a drink with just the right flavor right from the very first sip,’ they say, so you serve a drink half on the rocks. That might be what makes it an appropriate drink for Osakans with their rational mindset. Beyond that, the highball, the gin and tonic — standards like that — are very popular as well.”

So relates Keiichi Hayakawa, owner of Bar Leigh, located in Kitashinchi, when posed the question What sort of drink fits the Osaka style?

With an order for a highball, Mr. Hayakawa takes a bottle of Hibiki Japanese Harmony whisky from the row of shelves behind him, sets it on the counter and starts to shave a cube of ice with a kitchen knife. To keep the whisky from tasting watery, he says, he must remove all the frosty parts from its edges. 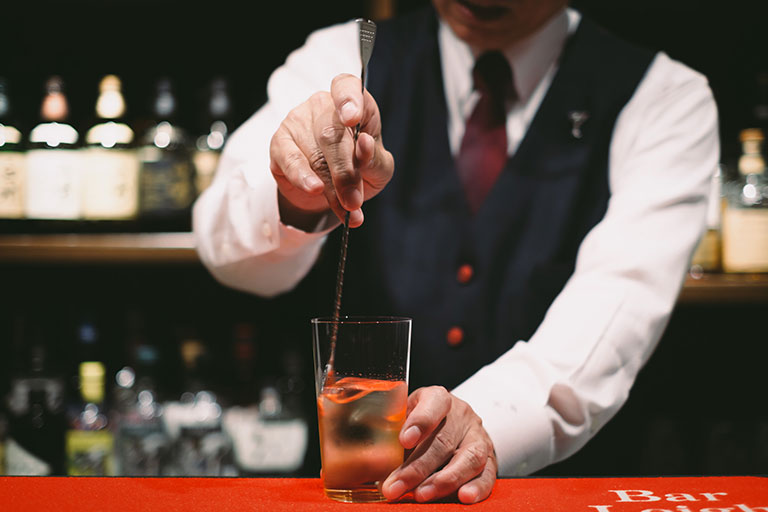 By “weeping” he seems to mean for the surface of the ice to melt a bit and become transparent. Inserting the columnar block of ice — which has begun to weep — into a tumbler, he pours in the whisky. With the gentle stirring of a muddler, he blends the whisky with the ice, then softly pours in some carbonated water…

In the glass, the drink has a see-through amber hue with a hint of bubbles, with an appearance almost as if the ice wasn’t even there. Upon taking a sip, the sweetness and essence of the whisky spreads in the mouth, and goes down with a lightly stimulating effect from the gentle fizz. Seeming almost like an altogether different drink from the usual highballs one comes across, which tend to be popular for the strength of their carbonation, this one has a refinement of flavor that is striking.

“I hear that a lot, even though I’m not using any special ingredients. It’s just, with a simple sort of drink like this, the important thing is to take care in the way you make it,” he explains, and in these words I feel I’m in the presence of a bartender of eminence.

Kitashinchi’s History, In Coexistence with the History of Western Spirits in Japan

Kitashinchi, where Bar Leigh is located, is home to over 3,000 eating and drinking establishments packed together in a space measuring just 800×300 meters. In keeping with its status as a hub for nighttime adult social activities, it features rows of top-class establishments for drinking and dining as well.

“When it comes to districts with bars, I think Ginza in Tokyo might have the longest history, but Osaka’s bar culture has a history of considerable length and depth as well. In particular, Suntory has had its headquarters for many years in Dōjima, right next to Kitashinchi. Suntory is the company that’s been the driving force behind Western liquor culture in Japan, so it’s no exaggeration to say that the bars of Kitashinchi have coexisted with the history of Western spirits in Japan.”

Savor the Experience of an “Omoroi” District

Even while Kitashinchi maintains this sort of orthodox history, Mr. Hayakawa posits that what defines the district’s bars might be “the way they lack pretension and have a sense of familiarity to them.”

He continues, “Venture out and open one of those doors, and I think you’ll be able to enjoy yourself to your heart’s content. There’s something that exists that I would call the ambience of a bar, though, that I think guests will need to be mindful of. Kitashinchi has a lot of establishments that are very compact in size, and that’s true of our place here too. Just a couple guests or so might be just about the right number. Also, Kitashinchi is the domain of adults. Reckless people are not to be found here. For going out to have a drink and walking around a little, I would say this is really a safe place.”

To one final question of how he would describe Kitashinchi, Mr. Hayakawa relies on the Kansai dialect word omoroi.

“Now, when I say omoroi here, I don’t mean it in the sense of just being ‘fun’ or ‘funny,’ or something like that. When Osakans use the word omoroi, there’s a wide range of nuances they express with it, and it carries meanings like ‘nice’ and ‘amazing’ as well. So, when I say ‘Kitashinchi is omoroi, that’s the kind of meaning I have in mind.”

The individual character of Kitashinchi comes through in its bars, he says. Be sure to stop in at this omoroi bar in this omoroi neighborhood to experience an enjoyable time and delicious drinks.