With okonomiyaki, takoyaki, udon and more, Osaka is famous for its flour-based “Konamon gourmet” cuisine. Dig a little deeper, though, and some unexpected twists pop up in the historical roots of these foods. Let’s cultivate an even greater appreciation of the cuisine by taking a closer look to unravel the story of how “konamon” culture came to blossom in Osaka. 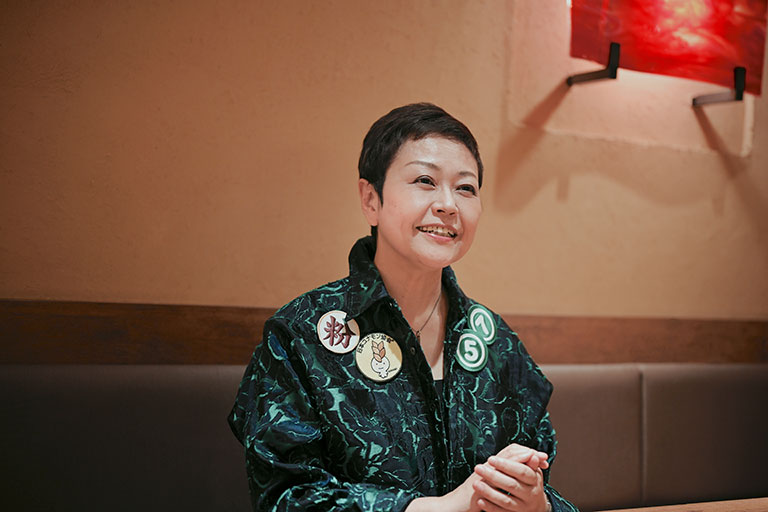 Paying a Visit to the Japan Konamon Association

Mana Kumagai, president of the Japan Konamon Association, took the time to fill us in on Osaka’s konamon culture. Her experience writing a graduation thesis on takoyaki (minced octopus grilled in little round balls of batter) as a university student compelled her to continue research on takoyaki in earnest. Issuing her first monograph, “Takoyaki,” in 1993, Kumagai has since published a number of other titles. In 2003, she founded the Japan Konamon Association with aims of spreading awareness of konamon culture and passing on knowledge of its traditions. Besides her role as Japan Konamon Association President, she currently engages in a wide range of activities as a researcher of culinary culture, a “takoyaki-ist” and a food marketing designer.

The word “konamon” has now come to be familiar in all parts of Japan. In fact, though, not even 20 years have passed since the term gained footing, and none other than Kumagai herself is said to have been a central player in spreading its awareness.
“The terms ‘konamono’ (foods made with flour) and ‘konemono’ (kneaded foods) seem to have originally been used in flour-producing regions throughout Japan. ‘Konamon’ itself, though, doesn’t appear in the dictionary of Osaka dialect words, and it isn’t really Osaka-ben. ‘Konamon’ has a mascot character kind of ring to it. It carries some impact, and that’s why it was chosen for the name of the association. Then the media has started picking up more stories featuring our association, Osaka konamon cuisine and so on since. It’s like the word just spread in a flash!” 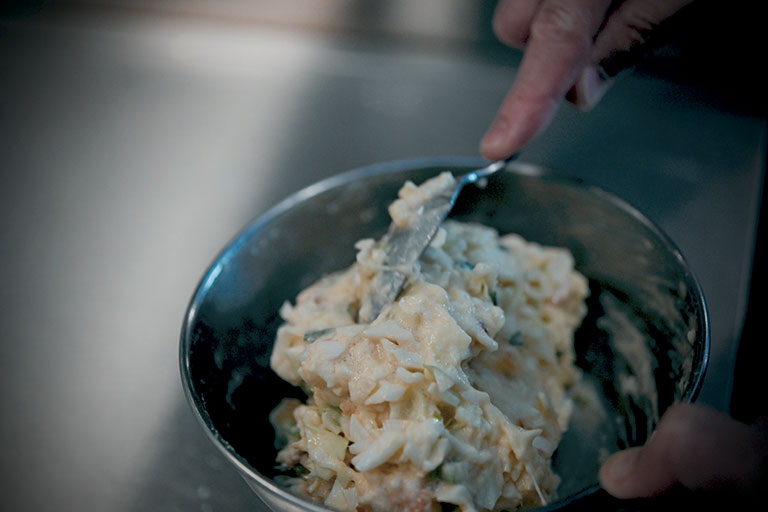 Okonomiyaki: Rooted in a Tea Confectionery Made by Sen no Rikyū?!

Mentions of Osaka konamon cuisine call to mind images of okonomiyaki — a savory Japanese-style pancake-like dish — as well as takoyaki, udon, ikayaki (squid “pancakes”), kushikatsu (deep-fried skewered meat and vegetables)… And all these popular dishes have a main ingredient they share in common: wheat flour — or as they call it in the Kansai dialect, “meriken-ko.”

“Wheat itself has a history of consumption in Japan dating back to antiquity,” Kumagai explained when asked about their roots. “It was apparently eaten roasted and simmered since those ancient times, but it wouldn’t have been too appetizing in that form, right? The practice of making wheat into flour for culinary uses is said to date to the Nara period in the 8th century when the technique of using millstones to process wheat into flour was introduced to Japan from China. Miwa somen, purported to constitute the roots of noodle culture in Japan, is said to date to the Nara period as well.”

The method of cooking wheat flour as a batter, then, may actually have been pioneered by Sen no Rikyū, an influential tea master of the 16th century.
“What I’m talking about here is fu-no-yaki, a type of tea confectionery that Sen no Rikyū offered in conjunction with tea ceremonies, and that Hideyoshi Toyotomi is said to have eaten as well. This is considered to be one of the foods connected to the roots of okonomiyaki. I’ve had the opportunity to try a version of fu-no-yaki myself, recreated by the owner of a Japanese confectionery shop in Kyoto. It was made with a wheat flour batter spread thin and grilled, then brushed with miso paste, and it complemented the flavor of matcha tea very nicely. Back in that day there really weren’t any other foods with a fluffy, springy texture like that, so I think it would have been quite a breakthrough discovery.”

Be that as it may, wheat flour at that time was a precious commodity, so it wasn’t until later in the Edo period that enjoyment of it was within the reach of common folk.
“Toward the end of the Edo period (around the 1850s to 1860s), the practice of making a batter with wheat flour and water and cooking it with a bunch of other ingredients mixed in became widespread. By the Meiji period (around the late 1800s and early 1900s), a dish called Yoshoku-yaki made with flour, cabbage and a special sauce made a hit with the common classes, who were attracted to ‘Western-style’ Yoshoku eateries. The dish came to be known familiarly as Issen Yoshoku, the ‘Issen’ referring to its price at the time, just a hundredth of a yen. In the pre-war days, lots of food stands popped up selling it, and the dish took hold as the quintessential flavor associated with the working class.” 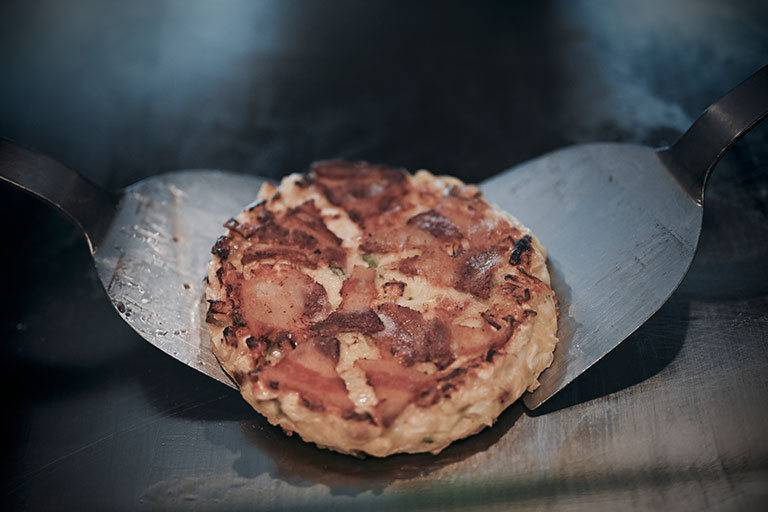 Udon, alongside okonomiyaki, is one more player that cannot be left out in telling the story of Osaka konamon culture. Osaka udon features a dashi broth with a distinctive solid taste of the kombu and fish shavings in it. And what sort of historical roots might this one have?
“In the Edo period, Osaka — considered the ‘Kitchen of the Nation’ — was supplied with a nice assortment of different culinary ingredients. Ma-kombu kelp brought in on trading vessels could be simply soaked in water to produce a fine broth, and its compatibility with Osaka’s soft water was out of this world. Adding little dried sardines, shaved flakes of dried, smoked mackerel and ingredients like that further produced a synergistic effect that made a delicious udon broth, and kake-udon — with the noodles served in broth — came to be a widely prepared dish. It’s believed that after Osakans discovered this marriage of dashi broth and konamon foods through kake-udon, they next came to use dashi to appetizing effect in dishes like okonomiyaki and takoyaki as well.” 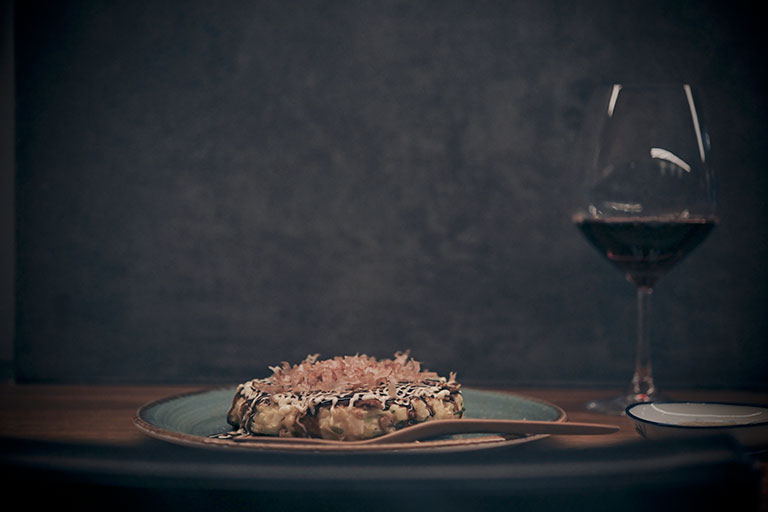 In Osaka, each family has an okonomiyaki recipe of its own, handed down from one generation to the next, and different okonomiyaki shops feature their own variations as well with a range of different ingredient mixtures and ways of cooking and serving the dish.
A shop in Kitashinchi called tanpopo, just a 5-minute walk from Zentis Osaka, has been serving okonomiyaki with recommended wine pairings for the past two decades. With the fruits and vegetables in the okonomiyaki sauce and the spices that get used, it only makes sense that the dish would pair well with wine. 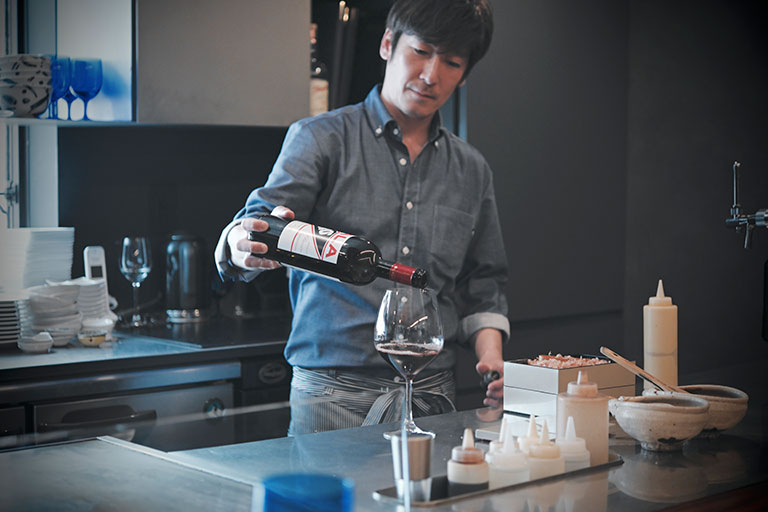 “With the solid presence of the sauce, people will tend to think a red wine on the bold side would pair well, but that can have the opposite effect of dampening the impacts of both. For a red, I’d recommend a selection with medium body and fruity notes. Sparkling wine makes an all-around good choice too, and while a clean, light-bodied white wine might not be assertive enough to stand up to the flavor of the okonomiyaki, otherwise whites should pair nicely too,” explains owner Keisuke Kamitani. 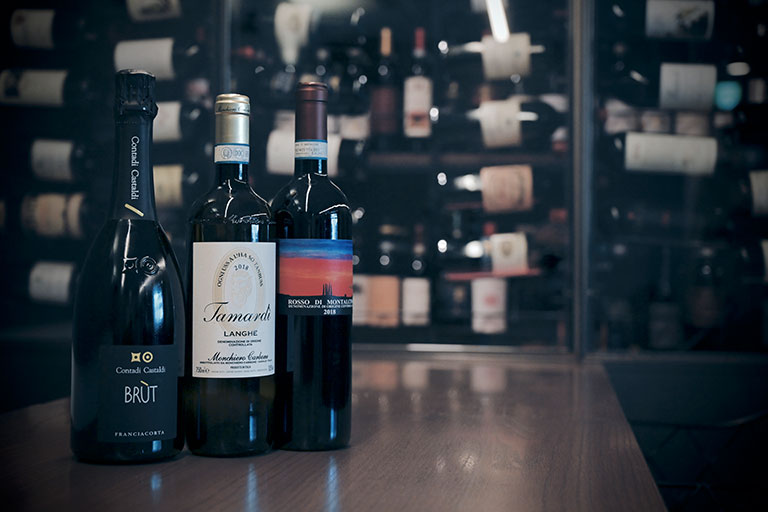 The okonomiyaki itself features a relatively small proportion of batter, with shredded cabbage predominating. Careful steam cooking with a lid on the grill brings out sweetness in the cabbage, and with the scantness of the batter, it comes out without a feeling of heaviness too.
“With the nature of the neighborhood here where we’re located, a lot of people will make us a second stop during a night out, or come in looking for a wine bar. We make our okonomiyaki with a light texture so it can be enjoyed as an accompaniment to their drinks.”

Delving into the intricacies of Osaka’s konamon culture, one starts to get a feel for the particularity and curiosity the people of the city have toward food, and their creative culinary ingenuity. Osaka, furthermore, is the birthplace of itamae kappo — an over-the-counter style of chef’s bistro — and of kaiten-sushi, and the Osakan spirit of hospitality lives on, ever in hopes guests will savor and enjoy the meals they’re served here. Even travelers from afar can expect a friendly, warm reception in this city.